Can BC Learn to Break Its Cycle of Systemic Violence? Debts Pile Up As We Call for Justice

“If some person were to go into the town of Fort St. John and do reckless and disrespectful damage in a cemetery, it would be completely illegal. Yet, even today we have development that does that: projects damage the gravesites of our ancestors in our traditional territories, like the flooding of the dams, and Canadian society seems to view that as acceptable.” – Dean Dokkie, West Moberly First Nations

“They [the elders] would catch a fish, and they would go pick wild onions and find some peavine and cook it up in the fish. That was transferred traditional knowledge from my grandmother to my mother. Nowadays what I get to do is to teach my son how to throw contaminated fish back into the river.” – Roland Willson, West Moberly First Nations

In 1968, BC flooded and devastated a vast area of land, forcing Indigenous peoples in northern BC off their ancestral lands, uprooting them from their livelihoods and displacing them from their own histories and cultures.  Many consider such brutal and pervasive harm to a people and their identity to be a form of genocide. Here we are 50 years later, and this province seems doomed to repeat its violent mistakes. The two quotes above appear in the display at the WAC Bennett dam information centre, to supposedly show that Hydro is listening to First Nations voices. But to continue the destruction of land and people through the Site C dam after hearing of the previous dam’s impact on Indigenous peoples only makes the insult and violence worse.

I inherited these injustices that I don’t want. I didn’t choose them, but I have a responsibility to address them as a Canadian citizen and someone who lives in the province of British Columbia. I’d like to tell Dean Dokkie, it is NOT acceptable for Canadians to flood West Moberly’s sacred gravesites for power we don’t need or want. It breaks my heart that the trout in the Peace River have been poisoned by previous dams to the point where no one should eat them and Chief Roland Willson can’t pass on traditional knowledge to his son.

It is incredibly unfair that two First Nations, the West Moberly and Prophet River First Nations, have been forced to go to court this summer to defend their rights under Treaty 8 and to protect the health of the Peace river for everyone, both Indigenous and non-Indigenous, who deserve clean rivers that flow with the intelligence only the land has. They are up against BC Hydro, the Province of BC, and the federal government of Canada, who all have billions more dollars to throw against them. This systemic inequity goes back to the signing of the treaties, when colonial governments pushed for treaties that attempted to steal the land from Indigenous peoples for a financial transaction. But the relationship with the land is priceless; it is sacred and cannot be bought or sold because it is worth more than any number you might try to put on it.

The 1899 Report of Commissioners for Treaty 8 (that accompanies the treaty) states, “we had to solemnly assure them [the Indigenous people] that only such laws as to hunting and fishing as were in the interest of the Indians and were found necessary in order to protect the fish and fur-bearing animals would be made, and that they would be as free to hunt and fish after the treaty as they would be if they never entered into it.”

Are the words of the colonizers worth the paper they’re written on? We’ll find out as these First Nations seek an injunction that every Canadian has a vested interest in supporting. On July 23, they will go to court in Victoria to protect the Peace Valley from destruction by the Site C dam while the civil claims case that they have filed goes through the courts, where it could take years for the judge to decide whether the dam infringes treaty rights. Although the First Nations have fought other legal battles for the Peace, none of the earlier cases weighed in on the question of treaty rights.

As the anniversary of Treaty 8 approaches on June 21, the honourable thing to do is to put the tools down and wait for the courts to decide.

If we live on this land, we have a responsibility to respect both the land and the Indigenous peoples who have lived on and cared for it since long before the creation of Canada. Increasingly, Canadians are coming to understand this, and learning to walk the talk of building better relationships with one another.

Much has been made of the many billions in debt that the Site C dam is pushing BC into, how it will follow the predictable financial disasters of Muskrat Falls in Labrador and Keeyask Dam in Manitoba. Those who follow these stories see clearly that government is working to subsidize corporations on the backs of taxpayers and everyday citizens. These debts are disturbing because they sit heavily and unfairly on the shoulders of generations to come.

But they are not the only debt we need to face and address. Incredible wealth has been taken out of Treaty 8 territory, which has been turned into a sacrifice zone for the south. There is a historical injustice that also calls for a debt that has not been paid back and still needs to be paid back. One small step toward reconciling the books would be to stop the Site C dam, to recognize the perpetual value of what remains of the free-flowing, intact Peace River, unique and precious to everyone.

Dates to Look Out For:

There are many ways to support the West Moberly and Prophet River First Nations, to show that respect for the land is a guiding principle for everyone, Indigenous and non-Indigenous, because that is the honourable, just way to live our lives with dignity and meaning.

Pledge to follow the court case seeking an injunction on the dam so that treaty rights can finally be addressed by the courts.

On July 5, a gathering called “We Are All Treaty People. Site C: Treaty Power or Power Politics?” is happening at Douglas College in New Westminster, BC. Featuring Julian Napoleon on Indigenous food sovereignty, Gordon Christie on treaty relations, Chief Bob Chamberlin from the Union of BC Indian Chiefs and biologist Adrienne Peacock, this event will raise funds to support the legal battle that West Moberly and Prophet River have undertaken for all of us.

What remains of the Peace is a world treasure, even if colonial governments systemically devalue it and deem it a sacrifice zone for short-term gain.

On July 14, the annual Paddle for the Peace will happen on the Peace River between Fort St. John and Hudson’s Hope. This is an excellent way to experience the Peace first hand, to participate in a ceremony of community building and love for the river.

These three events leading up to the July 23 court case are ways to strengthen a community of respect and justice, building the future we need. 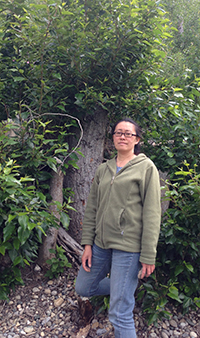 Rita Wong lives, works and writes from unceded Coast Salish territories, where she seeks justice in light of the devastating  effects of the WAC Bennett dam on the Peace River.

August 27, 2019 The BC government won’t be able to avoid continued litigation over the Site C dam. In a story published in the Narwhal today, Chief Roland Willson of the West Moberly First Nations Read more…

In July 2019, FightC and artists went up to connect with and respond to the sacred Peace Valley.

June 12, 2019Craig Benjamin, Amnesty International Canada In a long overdue response to the United Nations Committee on the Elimination of Racial Discrimination (CERD), BC and the federal government actually argue that approving a massively Read more…